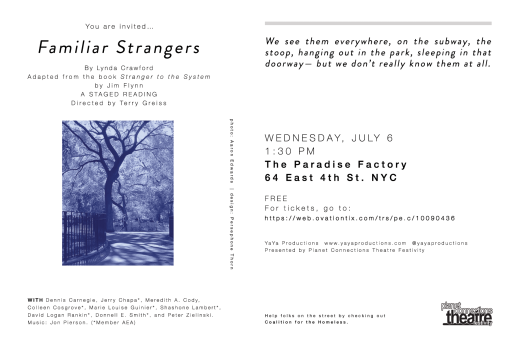 Dennis Carnegie (NELSON), formerly known as Dennis Pressey, was born and raised in East NY, Brooklyn. He graduated with honors from the drama department of Laguardia High School of Performing Arts. He further studied his craft with Martin Barter of the Neighborhood Playhouse. Dennis has co-starred and guest-starred on television shows such as Law & Order, Law & Order Criminal Intent, and Law & Order Special Victims Unit. He has also worked as a voice-over actor on over 90 television shows and feature films to date. A more comprehensive resume can be viewed at http://www.imdb.com. Dennis also spent eighteen years working with New York City public school students, teaching conflict resolution through the use of creative drama to children with moderate-to-severe behavioral problems and social emotional issues.

Jerry Chapa (RINO). An Army brat from Austin and Laredo, Texas, Jerry has performed around the country—theme parks, cruise ships, childrens’ theater, and musicals on tour, from Shakespeare to Sondheim. Favorites include: Singin’ in the Rain (MI Grand Award for Best Actor/Musical), Side Man (Gene Glimmer), Into the Woods (Wolf/Cinderella’s Prince), Noises Off (Freddie), I Love You­­—You’re Perfect…Now Change!, Chicago (Billy Flynn), A Chorus Line (Paul/Don), Mame with Loretta Swit, and Bye Bye Birdie with Priscilla Lopez. In NYC, performances with Endangered Artists’ Sanctuary include The Cherry Orchard (Gayef), The Tempest (Antonio), and Reading Between the Lies for last year’s NY FringeFestival. He has choreographed and directed (mostly teens and choruses), and ran an Intro to Musical Theater program for at-risk youth in Michigan. Jerry would especially like to thank Kelly Barrett, Schnele Wilson, Teri Monahan, Kathleen Warnock, Peter Bloch, Tina Howe, and his fiance Tim for their love and guidance here in NYC, in this new phase of his acting adventures.

Meredith A. Cody (SKYE, LUCY) is a proud member of The Irondale Ensemble Project. She is a graduate of The American Academy of Dramatic Arts and has studied with Terry Schreiber, UCB, and Irondale. Most recently, she was in Letter of Marque’s Lady Plays, Irondale’s Kafka’s Hamlet, Damen Scranton’s Tartuffe, and she was the associate scenic designer for Irondale’s 1599. In the years since Meredith moved from Michigan, she has had the privilege of working, onstage and off with such wonderful theatre companies as The Amoralists and End Times Productions. A big thank you to Terry Greiss, Lynda Crawford, Amanda Hinkle, Gabriel Grilli, and Jim Niesen.

Colleen Cosgrove (APRIL, SPECIAL LADY, PASSERBY, LORETTA) had the pleasure of appearing in Lynda Crawford’s A Procession of Clouds (Finalist, The Unchained Theatre Festival). Other work includes The Taming of the Shrew (Shakespeare in Bryant Park), Romeo and Juliet (Shakespeare in the Parking Lot), Justice, Security 1 & 2, Both, and Paper (The Drilling Company), Finders Keepers (Finalist, Thespis Festival), and The Judas Tree (MultiStages). Please visit http://resumes.actorsaccess.com/colleencosgrove

Lynda Crawford (Playwright) is grateful to Jim Flynn for writing his book, for talking to the people living in the park and getting their stories, and to Terry and this exquisite cast and crew who gave so much heart to these characters, helping us all see them a little better. Lynda’s other plays include Pillow of Tears, recently in the In Her Name Festival in April 2016 and at the Women Playwrights International Conference in Cape Town, South Africa, July 2015; The Audit, presented at EAT’s New Work Series, October 2015; Strange Rain, showcased in FringeNYC 2013 and awarded Overall Excellence in Playwriting; A Procession of Clouds, a finalist in the Unchained Festival 2013 and tied for Audience Favorite; Consumer Behavior (co-written with Gary Kupper), showcased at FringeNYC 2002, and the recipient of a Playwrights’ Project grant from Abrons Arts Center in 2000 and 2001; Secrets of the Birds, a finalist in the 2006 Samuel French Short Play Festival (also directed by Terry Greiss); and Howard Ink!, produced in the Harvest Festival in 2013. Several of Lynda’s plays are published by Indie Theatre Now. Lynda is a member of the Dramatists Guild, the K/Q Collective, the League of Independent Theater, and the League of Professional Theatre Women. She also teaches as an adjunct at SUNY/Empire State College and at NYU.

Terry Greiss (Director) has been working in the theatre for 45 years. He is an actor, director, producer and co-founder, of NYC’s Irondale Ensemble Project. He has performed in over forty roles with the company, and is a co-creator of most of Irondale’s original works and education programs. He has conducted hundreds of workshops in public schools, prisons, professional training programs, and theatres. He is a Master Teacher of Acting in the Broadway Teacher’s Summit. In 2010 he was awarded Brooklyn Arts Exchange’s Arts Education Award. He has been a panelist for the NEA, NYS Council on the Arts, TCG, Brooklyn Arts Council, and numerous other funding organizations. Terry was the Founding President of the Network of Ensemble Theatres, a national consortium of artist-driven permanent theatre ensembles. He is currently a member of the governing steering committee for the Downtown Brooklyn Arts Alliance. Terry has been part of three Russian-American collaborations between Irondale and the International Classic Center of St. Petersburg (1990, 1994, 1998). In April 2008 he was invited by the United States Embassy to lecture and teach at Moscow’s leading theatre academies, the Moscow Art Theatre and G.I.T.I.S., at the theatre academy in Yaroslavl and at to speak about the American ensemble theatre movement at the Golden Mask Festival. In addition to his work at Irondale, he has taught at the New School and the University of Wisconsin Drama Center. Occasionally venturing outside of Irondale as an actor, Terry has performed at the Manhattan Theatre Club in Humble Boy, and at the Cincinnati Playhouse in Sarah Ruhl’s adaptation of Chekhov’s The Three Sisters, directed by John Doyle. On television he has been seen on PBS American Masters series, The American Novel, and HBO’s Boardwalk Empire. In October 2008, after leading Irondale’s three million dollar capital campaign, Terry and the Irondale Ensemble opened the Irondale Center, the company’s first permanent home, in the Brooklyn Cultural District. His latest theatrical projects are To Protect, Serve, and Understand, a collaboration between Irondale and the NYPD using improvisation to bring police officers and community members to greater empathy and understanding, and The 1599 Project—all four plays that Shakespeare wrote in 1599 performed in one night. Starting in the summer of 2016 he will be joining the Alan Alda Center for Communicating Science’s Improv Travel Team, conducting improvisation workshops for scientists around the United States. Terry is a graduate of the NYC High School for the Performing Arts and Sarah Lawrence College.

Marie Louise Guinier (NANCY). NY theater credits include the BAM Harvey, the Castillo Theatre, Lincoln Center Out-of-Doors, the Barrow Group Theatre, the American Theater of Actors, and the Metropolitan Playhouse. Regionally: the Folgers Theatre, DC, and the Boston Center for the Arts, where she was nominated for an IRNE for the role she originated, Patience in Patience of Nantucket. Her work in film, TV, and video includes the multi-award-winning short If the Trees Could Talk—writer/director Michael Weinstein, as well as the “staged improvisational” ABC’s What Would You Do? As an actor, finding a writer who appreciates your work enough to invite you back is very special indeed—thank you Lynda Crawford for being that writer. See more at http://resumes.actorsaccess.com/marielouiseguinier

Shashone Lambert (COP, SONYA, NEIGHBOR) was born and raised in Staten Island, NY. She has done theatre, indie films, print work, hosting, and more. Not one to complain about the lack of work, Shashone has written and produced two short films and her plays have been accepted into numerous theater festivals. She is blessed and excited to be a part of this staged reading! Please visit her website at http://www.ShashoneLambert.com

Jon Pierson (Bucket Drum, Sounds) studied at Mannes College of Music. He was co-founder (with Wyatt Day) and lead singer of the rock group Ars Nova, singer and bass trombonist with White Elephant, and studio musician for numerous artists. He was composer for the music in The Audit (EAT, 2015); composer and a player in Strange Rain (FringeNYC 2013); he co-wrote the book and music (with Austin Allen) for Brass Ring (performed at the Village Gate); and he acted as musical director for One Good Day by Lynda Crawford and Gary Kupper. He was a contributing composer for Weatherlove! by Rex Weiner, played in the band for Consumer Behavior by Lynda Crawford and Gary Kupper (FringeNYC 2002), and for Sex on Trial by Joe Kane. Currently, Jon is bass trombonist with the Maui Pops Orchestra.

David Logan Rankin (LARRY, CREEPY GUY, AGENT, DIRECTOR) is happy to be working with Lynda Crawford again after playing Sam Egan in her play “The Audit.” NY Theater: Night With Guests (for which he won an Overall Excellence Award in Acting at the 2015 NY International Fringe Festival). Other NY credits include Burke in Within the Law, and Buddy Brad/Vet/Big Mike in Resistance at the Metropolitan Playhouse; Iago in Othello, Autolycus in (and music composer for) The Winter’s Tale, and Puck/Snout/Philostrate in A Midsummer Night’s Dream at The Shakespeare Project; Edgar/Mad Tom in King Lear (opposite Ralph Waite) at Intar 53. Regional: King of France in All’s Well That Ends Well at Shakespeare on the Sound, Pozzo in Waiting for Godot, Cornwall in Lear, and Rosse in Macbeth at Urban Theater Co.; co-writer & lead actor in Symphony of Idols and Deputy Director in Havel’s Temptation at DiverseWorks, Inc. Film: Saint Janet, Loose Threads, Sane Jules Blaine, Atlantic City Serenade, All Flowers in Time, Glow of a Warm Aquarium. Artist-in-residence with Mabou Mines (2001–02 Artist Suite) for workshop of his play Mister Nameless Returns. Graduate of The American Academy of Dramatic Arts, NYC. Member of SAG/AFTRA/AEA.

Donnell E. Smith (JAZMIN, PRODUCTION ASSISTANT). A creative force, with unprecedented passion, Donnell E. Smith began cultivating his artistic expression at a young age, while growing up in Baltimore, Maryland. Recording music enveloped his interests, long before acting claimed its rightful place in his soul. From stage to film, he has worked under the direction of the acclaimed Phylicia Rashad, Jade King Carroll, Chris Burris—and more—and continues to uphold his mission to inspire the world and honor those who inspire him, everyday. Explore more at http://www.SmithDonnellE.com

Peter Zielinski (JIM) is a Philadelphia-based actor who has only recently found his way to New York. Since graduating from Rowan University’s theatre program, Peter has worked with Iron Age Theatre, Walking Fish Theatre Company, Philadelphia Theatre Workshop, Quince Productions, The Eagle Theatre, Society Hill Playhouse, and Philadelphia Plays and Players, among others.